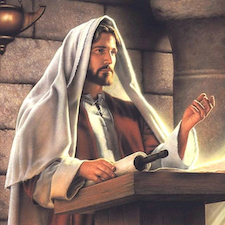 In Luke 20 part 1 Jesus is found by the scribes and chief priests speaking with great authority in the temple. He has turned over the tables of the money changers and taken full liberty among the leaders who are conspiring to assassinate Him. The leaders collude to snare Jesus in His words to which He responds by giving them the parable of the vineyard, and the unjust husbandmen.

[Luk 20:1-27 KJV] 1 And it came to pass, [that] on one of those days, as he taught the people in the temple, and preached the gospel, the chief priests and the scribes came upon [him] with the elders, 2 And spake unto him, saying, Tell us, by what authority doest thou these things? or who is he that gave thee this authority? 3 And he answered and said unto them, I will also ask you one thing; and answer me: 4 The baptism of John, was it from heaven, or of men? 5 And they reasoned with themselves, saying, If we shall say, From heaven; he will say, Why then believed ye him not? 6 But and if we say, Of men; all the people will stone us: for they be persuaded that John was a prophet. 7 And they answered, that they could not tell whence [it was]. 8 And Jesus said unto them, Neither tell I you by what authority I do these things. 9 Then began he to speak to the people this parable; A certain man planted a vineyard, and let it forth to husbandmen, and went into a far country for a long time. 10 And at the season he sent a servant to the husbandmen, that they should give him of the fruit of the vineyard: but the husbandmen beat him, and sent [him] away empty. 11 And again he sent another servant: and they beat him also, and entreated [him] shamefully, and sent [him] away empty. 12 And again he sent a third: and they wounded him also, and cast [him] out.

13 Then said the lord of the vineyard, What shall I do? I will send my beloved son: it may be they will reverence [him] when they see him. 14 But when the husbandmen saw him, they reasoned among themselves, saying, This is the heir: come, let us kill him, that the inheritance may be ours. 15 So they cast him out of the vineyard, and killed [him]. What therefore shall the lord of the vineyard do unto them? 16 He shall come and destroy these husbandmen, and shall give the vineyard to others. And when they heard [it], they said, God forbid. 17 And he beheld them, and said, What is this then that is written, The stone which the builders rejected, the same is become the head of the corner? 18 Whosoever shall fall upon that stone shall be broken; but on whomsoever it shall fall, it will grind him to powder. 19 And the chief priests and the scribes the same hour sought to lay hands on him; and they feared the people: for they perceived that he had spoken this parable against them.

20 And they watched [him], and sent forth spies, which should feign themselves just men, that they might take hold of his words, that so they might deliver him unto the power and authority of the governor. 21 And they asked him, saying, Master, we know that thou sayest and teachest rightly, neither acceptest thou the person [of any], but teachest the way of God truly: 22 Is it lawful for us to give tribute unto Caesar, or no? 23 But he perceived their craftiness, and said unto them, Why tempt ye me? 24 Shew me a penny. Whose image and superscription hath it? They answered and said, Caesar’s. 25 And he said unto them, Render therefore unto Caesar the things which be Caesar’s, and unto God the things which be God’s. 26 And they could not take hold of his words before the people: and they marvelled at his answer, and held their peace.

All of the events since Jesus’ triumphal entry into the city of Jerusalem have come to pass on Tuesday of passion week until now. This has been one long day of extreme adulation, opposition and controversy. At this point Jesus is still in the temple, having driven out the money changers, and the scribes and chief priests come upon Him teaching the people and preaching the gospel. Notice that Jesus was teaching AND preaching. There is a difference. The word teach is “didasko” which means to “hold a discourse for the purpose of teaching”. Preaching on the other hand is a different form of communication. The word “preach” in the New Testament is “kerruso” meaning to trumpet aloud in this case the gospel, the Good News of the kingdom. There are times we need to be informed and there are times that we need to be inspired. You can be inspired by fear mongering to an alarmist state or you can be inspired to hope and expectation by the Good News.

To Be Continued Tomorrow