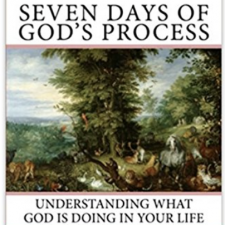 [Exo 20:10 KJV] 10 But the seventh day [is] the sabbath of the LORD thy God: [in it] thou shalt not do any work, thou, nor thy son, nor thy daughter, thy manservant, nor thy maidservant, nor thy cattle, nor thy stranger that [is] within thy gates:

This day connects with the seventh day of the week under the Old Covenant and also the seventh millennia from Adam. According to Hebrew tradition, Adam and Eve were placed in the garden of Eden in the Jewish year 5777. If correct, this chronology would place us within 30 years of the advent of God’s seventh millennia from the inception of the world and the placement of mankind in the garden of Eden. This is also tantalizingly synchronous with a third day advent predicted by Hosea:

[Hos 6:1-3 KJV] 1 Come, and let us return unto the LORD: for he hath torn, and he will heal us; he hath smitten, and he will bind us up. 2 After two days will he revive us: in the third day he will raise us up, and we shall live in his sight. 3 Then shall we know, [if] we follow on to know the LORD: his going forth is prepared as the morning; and he shall come unto us as the rain, as the latter [and] former rain unto the earth.

What is to be our personal response to the thought of the eschatological consummation of history? In Luke 9:13 very simply, Jesus commanded, “occupy till I come…” What are we to busy ourselves about? Waiting on a mountain somewhere peering into the sky, anticipating the advent? No, we are to busy ourselves with obeying Matt. 6:33, as the personal mandate for our lives to seek first the kingdom. There is no need to be overly concerned about goods and gold and life’s treasures, for all things will be added to us when we seek first the kingdom. This is not simply a general exhortation to be sincere and do our best. There is, discernable in scripture, specific mandates and disciplines of the spirit that are identifiable and practicable by any believer at any point in life. That is the message of this book. As we commit to God’s process, we will walk into His outcome and one day that will have a much broader, cataclysmic meaning than we could ever know.

In Hosea 6:1-3, the third day is when “He will raise us up and we will walk in His sight…” and the seventh day, according to Isaiah 2:1-2 when “all the nations shall flow into the mountain of the house of the Lord…” These two points of sacred prognostication, point to one and the same event. This event is not described as some egalitarian, cosmic moment of divine spontaneity, but rather (according to Hosea), something that we walk into, because “then shall we know IF we follow on to know the Lord, that his going forth is prepared as the morning; and He shall come unto us as the rain, as the latter and former rain unto the earth…” The metaphor of rain implies a participatory outpouring of God’s spirit, similar, yet greater in magnitude than what we have seen or at least have record of in contemporary or ancient Christian history. In other words – something we are not only WAITING ON but also WALKING INTO.

This has implications for us both eschatologically as the global body of Christ in the earth, and personally as we choose to not only live in the Spirit but also walk in the Spirit (Gal. 5:25) – into the Seventh day of God’s rest, the Third day of going on to know Him in the former and latter rain as Joel prophesied “in the first month…” (Joel 2:23).

The Character of God’s Rest:

Now God rests from His labors. This is what Paul referred to in Hebrews 4:

[Heb 4:9-11 KJV] 9 There remaineth therefore a rest to the people of God. 10 For he that is entered into his rest, he also hath ceased from his own works, as God [did] from his. 11 Let us labour therefore to enter into that rest, lest any man fall after the same example of unbelief.

Now this is not merely going to heaven and sitting on a fleecy white cloud. This is not sitting back in stagnation waiting on God to do something that He has left up to us to be the participants of. The final act of God, where Adam and Eve were concerned, was to confer authority on them, to have dominion and to subdue the earth. When God entered into His rest, having given man (you and I) dominion, there were specific things we were expected to do:

The word used in commanding Adam and Eve to “dress” the garden of Eden includes the meaning of “to compel it to produce” or to “compel to serve for another”. Adam, by the authority given him by God, could open his mouth and by the example God set in six days of creation, compel the earth to carry out God’s plan. This is the mandate of declaration spoken of in Job:

[Job 22:28 KJV] 28 Thou shalt also decree a thing, and it shall be established unto thee: and the light shall shine upon thy ways.

The word established there means that the thing decreed shall “rise up before thee”. After man fell, he lost the ability to exercise this dominion. Therefore God told him in Gen.3:19, that he would have to do the work himself and make his living in the sweat of his face till he returned to the dust from whence he came. What it was intended he should do as the personification of God’s image on the earth – now, being outside of Christ in a fallen condition, he must do by the sweat of his brow