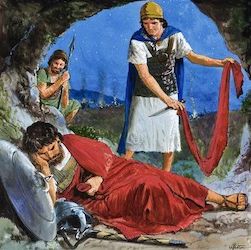 On another occasion I received a call from a former friend – a man I had found in the gutter and helped raise him up, training him in leadership and eventually sponsoring him financially through the church I pastored to go out and start a church on his own. In time his church became and still is one of the largest churches in the area – far larger than the church I myself pastored. With all this man’s success he was so insecure he raised a very public and detestable assault against my ministry and me personally. He openly courted every church member I had seeking to sway them to leave my church and join his fellowship nearby. He stated repeatedly in the pulpit in front of hundreds that this was his time and everything that Russ Walden had belonged to him and it was God’s will to take from me and give to him. He encouraged his entire congregation to get behind this despicable campaign of destroying my ministry and assassinating my character.

Again a few years later I received a phone call. He had been caught in a sexual indiscretion and unceremoniously exposed, rejected and fired from the church he himself had built with our initial sponsorship. He wanted to see me. I was dumbfounded that he would even call me but agreed to come see him. It was several miles away and as I drove along I heard the Father say “I have delivered your enemy into your hands. What are you going to do with him?” I drove on for sometime before I answered. I honestly paused longer than I should. The pain this man inflicted upon me while posing as my dear friend was one of the worst things I have experienced in my life. Finally he was vulnerable and exposed before me. What was I going to do to him? “Lord” I said, “I’m going to love him …” The Lord answered me back – “Just checking!” When your enemy is on the ropes so to speak it is the greatest test of your character.

6 And he said unto his men, The LORD forbid that I should do this thing unto my master, the LORD’S anointed, to stretch forth mine hand against him, seeing he [is] the anointed of the LORD. 7 So David stayed his servants with these words, and suffered them not to rise against Saul. But Saul rose up out of the cave, and went on [his] way. 8 David also arose afterward, and went out of the cave, and cried after Saul, saying, My lord the king. And when Saul looked behind him, David stooped with his face to the earth, and bowed himself. 9 And David said to Saul, Wherefore hearest thou men’s words, saying, Behold, David seeketh thy hurt?

10 Behold, this day thine eyes have seen how that the LORD had delivered thee to day into mine hand in the cave: and [some] bade [me] kill thee: but [mine eye] spared thee; and I said, I will not put forth mine hand against my lord; for he [is] the LORD’S anointed. 11 Moreover, my father, see, yea, see the skirt of thy robe in my hand: for in that I cut off the skirt of thy robe, and killed thee not, know thou and see that [there is] neither evil nor transgression in mine hand, and I have not sinned against thee; yet thou huntest my soul to take it. 12 The LORD judge between me and thee, and the LORD avenge me of thee: but mine hand shall not be upon thee. 13 As saith the proverb of the ancients, Wickedness proceedeth from the wicked: but mine hand shall not be upon thee. 14 After whom is the king of Israel come out? after whom dost thou pursue? after a dead dog, after a flea. 15 The LORD therefore be judge, and judge between me and thee, and see, and plead my cause, and deliver me out of thine hand.

If you do anything in this life that reflects seeking the kingdom you will have enemies. They will lie on you. They will cheat and steal and spread salacious rumors. They will study your life and thrust their blade of sedition and criticism into every vulnerability and crack in your life. They will persecute you because of what you do right. They will mock you because of things you have done wrong. They will launch campaigns of public scorn to destroy your ministry and your reputation. In all of this what will be your response? Jesus said this:

[Mat 5:43-44 KJV] 43 Ye have heard that it hath been said, Thou shalt love thy neighbour, and hate thine enemy. 44 But I say unto you, Love your enemies, bless them that curse you, do good to them that hate you, and pray for them which despitefully use you, and persecute you;