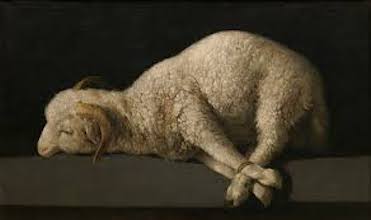 Choose to See the Lamb in Others

Several years ago, Kitty and I visited the IHOP 24/7 prayer center, where I had a profound vision. This prayer meeting consists of people gathering in Kansas City for prayer that has been going on continually for many years. There is a worship team that changes every two hours, and people are allowed to come and go quietly, participating as they see fit. It is a very relaxed atmosphere conducive to contemplation, prayer, and hearing from God. At that time, we were still in the business world, and due to work constraints, we would go up in the wee hours of the morning, 2-3 a.m., and join in, soaking the presence of God.

[Rev 5:6 KJV] 6 And I beheld, and, lo, in the midst of the throne and of the four beasts, and in the midst of the elders, stood a Lamb as it had been slain, having seven horns and seven eyes, which are the seven Spirits of God sent forth into all the earth.

As I was reviewing this passage, for only the first few seconds, the worship leader started the first song of their set, and it was a spontaneous song of the Lord based on the very scripture the Lord told me to turn to. Now He had my attention. I sat there in the Lord’s presence and read this verse over and again when the Father said this to me:

“Russ, when I look at you, I only see the Lamb. I’m not looking at your shortcomings or things of the past – I choose only to see in you the Lamb slain from the foundation of the world.”

What a blessing! What the Lord was saying to me at that moment brought to mind Psalms 103:12:

What does this mean for you? It means when you pray or come to the Father, He isn’t looking for reasons to disqualify you. He only looks at the Lamb, at the price that Jesus paid for you as the basis of accepting you, loving you, and moving in your life. Isn’t that good? There was more.

After the Lord shared this with me, sitting there at 3 a.m. listening to the worship going forth, He said one more thing:

“When I look at you, Russ, I choose to only see the Lamb as the basis of your approach to Me and your standing in My kingdom. However, you only benefit from this to the degree that you apply that same perspective to others.”

To explain, the Father took me to the following passage in Matthew 18:

Matthew 18:23 Therefore is the kingdom of heaven likened unto a certain king, which would take account of his servants. 24 And when he had begun to reckon, one was brought unto him, which owed him ten thousand talents. 25 But forasmuch as he had not to pay, his Lord commanded him to be sold, and his wife, and children, and all that he had, and payment to be made. 26 The servant therefore fell down, and worshipped him, saying, Lord, have patience with me, and I will pay thee all. 27 Then the Lord of that servant was moved with compassion, and loosed him, and forgave him the debt. 28 But the same servant went out, and found one of his fellowservants, which owed him an hundred pence: and he laid hands on him, and took him by the throat, saying, Pay me that thou owest. 29 And his fellowservant fell down at his feet, and besought him, saying, Have patience with me, and I will pay thee all. 30 And he would not: but went and cast him into prison, till he should pay the debt. 31 So when his fellowservants saw what was done, they were very sorry, and came and told unto their Lord all that was done. 32 Then his Lord, after that he had called him, said unto him, O thou wicked servant, I forgave thee all that debt, because thou desiredst me: 33 Shouldest not thou also have had compassion on thy fellowservant, even as I had pity on thee? 34 And his Lord was wroth, and delivered him to the tormentors, till he should pay all that was due unto him.

What is the application for us? When you look at others, even those who have wronged you, owe you or wounded you, choose to see the Lamb. If you expect to enjoy and take advantage of the fact that this is how God sees you, then you MUST look at all others the same way – even unbelievers. Is it necessary to even say this? Christians are some of the most judgmental, unforgiving people on the earth. We who have been forgiven much are not known as a general rule as a forgiving people. Let’s change that starting right now.

You will be amazed at the upgrade such a choice to forgive will make in your walk with God.