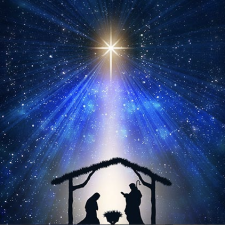 Luke 2:25 And, behold, there was a man in Jerusalem, whose name [was] Simeon; and the same man [was] just and devout, waiting for the consolation of Israel: and the Holy Ghost was upon him. 26 And it was revealed unto him by the Holy Ghost, that he should not see death, before he had seen the Lord’s Christ. 27 And he came by the Spirit into the temple: and when the parents brought in the child Jesus, to do for him after the custom of the law, 28 Then took he him up in his arms, and blessed God, and said, 29 Lord, now lettest thou thy servant depart in peace, according to thy word: 30 For mine eyes have seen thy salvation, 31 Which thou hast prepared before the face of all people; 32 A light to lighten the Gentiles, and the glory of thy people Israel. 33 And Joseph and his mother marvelled at those things which were spoken of him. 34 And Simeon blessed them, and said unto Mary his mother, Behold, this [child] is set for the fall and rising again of many in Israel; and for a sign which shall be spoken against; 35 (Yea, a sword shall pierce through thy own soul also,) that the thoughts of many hearts may be revealed.

36 And there was one Anna, a prophetess, the daughter of Phanuel, of the tribe of Aser: she was of a great age, and had lived with an husband seven years from her virginity; 37 And she [was] a widow of about fourscore and four years, which departed not from the temple, but served [God] with fastings and prayers night and day. 38 And she coming in that instant gave thanks likewise unto the Lord, and spake of him to all them that looked for redemption in Jerusalem. 39 And when they had performed all things according to the law of the Lord, they returned into Galilee, to their own city Nazareth. 40 And the child grew, and waxed strong in spirit, filled with wisdom: and the grace of God was upon him. 41 Now his parents went to Jerusalem every year at the feast of the passover. 42 And when he was twelve years old, they went up to Jerusalem after the custom of the feast. 43 And when they had fulfilled the days, as they returned, the child Jesus tarried behind in Jerusalem; and Joseph and his mother knew not [of it]. 44 But they, supposing him to have been in the company, went a day’s journey; and they sought him among [their] kinsfolk and acquaintance. 45 And when they found him not, they turned back again to Jerusalem, seeking him.

46 And it came to pass, that after three days they found him in the temple, sitting in the midst of the doctors, both hearing them, and asking them questions. 47 And all that heard him were astonished at his understanding and answers. 48 And when they saw him, they were amazed: and his mother said unto him, Son, why hast thou thus dealt with us? behold, thy father and I have sought thee sorrowing. 49 And he said unto them, How is it that ye sought me? wist ye not that I must be about my Father’s business? 50 And they understood not the saying which he spake unto them. 51 And he went down with them, and came to Nazareth, and was subject unto them: but his mother kept all these sayings in her heart. 52 And Jesus increased in wisdom and stature, and in favour with God and man.

Attending and present at the circumcision of Jesus was a man named Simeon and a woman named Anna. Simeon was quite elderly and rejoiced greatly upon seeing Jesus because his testimony was that he would not see death before his eyes witnessed the coming of the Messiah. It is possible that Simeon attended many circumcisions, searching for the Messiah just as John the Baptist baptized many, looking for the sign of the son of God to appear upon them, which of course finally happened with the dove appeared over Jesus with the voice of the Father affirming His only begotten son. What sign Simeon saw that convinced him that this baby was the one promised to him is unclear, but what is clear is that Simeon is utterly confident that Jesus is the Messiah, set to bring salvation not only to the Jews but to be a light even to all the Gentile nations as well. To all of this, Joseph and Mary are amazed, and Simeon blessed them and the babe, along with a warning to Mary that there are things to come regarding Jesus that will pierce her heart with sorrow. It is interesting that Simeon, speaking by the spirit of prophecy, doesn’t address Joseph in these matters at all, suggesting that perhaps Joseph dies before these events take place, leaving Mary a widow. We know that Joseph was not in Mary’s life at the time of Jesus’ crucifixion, because Jesus just before dying commissions John to take care of her as his own mother.

In verse 36, we meet another elderly saint by the name of Anna, who had been a widow for 84 years, which would have at least put her in her late nineties who was a volunteer worker, coming daily to the temple. She sees Jesus and observes Simeon’s behavior and declarations about Jesus and rejoices that she would be present to witness the coming of the Messiah. Another thing we will make a note of is that the text says that Simeon “came by the Spirit” into the temple, whereas by contrast, Anna was in the temple every day, fasting and praying. If you were a pastor, you would undoubtedly appreciate Anna’s fastidious commitment to her temple duties. In contrast, in regard to Simeon, you might not be able to depend on him because he might “come by the spirit” into the temple, but then again, he might not. The important thing to note is to let every man be convinced in his own mind and not by cultural conditioning or the expectation of others what character of service to God you give yourself over to. We should be faithfully involved in the community of Christ, but which is more important, being led by the spirit or by religious tradition? It is all about what God is saying and doing in your life at the time.

Verse 40 tells us that after returning to Nazareth, Jesus’ childhood passes without much to report, until a visit to Jerusalem, perhaps for the first time for Jesus comes when he is about 12 years old. The timing is interesting because in Jewish traditions this age marks a rite of passage for Jewish girls and boys that may have been something Jesus was keenly aware of on His visit to the Holy city. We don’t know the details of the visit, but after leaving on the return journey, Mary and Joseph find that Jesus is nowhere to be found. The parents hurry back to Jerusalem to find Jesus in the temple three days later having theological discussions with the scribes and learned men who are fascinated with His answers and with the questions He is putting to them. We might wonder about the events that brought Jesus from the streets of Jerusalem to the distinguished company of scholars where Mary and Joseph found him. It isn’t like they traveled in the same circles. Most likely, there was a chance meeting with a temple official is impressed with Jesus and whisks him away without His parent’s permission to sit in front of the authorities and witness what they would have considered child prodigy speaking of the things of the law. Regardless, Jesus is scolded by his mother and father to which He objects that He is only going about His “Father’s business” which gives us an inkling that even at this young age Jesus was beginning to know exactly who He was and that His life was destined for a specific purpose among the people of God.

The chapter concludes with Jesus returning to Nazareth and being subject to them for the balance of his adolescence and young adulthood. He is spoken of during this time as growing in wisdom and in stature and in favor with God and man. There were then things going on in Jesus’ life in the backwater town of Nazareth that got the attention of those around him and marked him as a remarkable young man upon whom it was believed the hand of God rested in a dramatic fashion. It is also important to note that whatever Jesus’ wisdom in talking with the scribes in Jerusalem, He didn’t instinctively know everything there was to know about who He was, because verse 52 states clearly that this was a wisdom He gained over time and not just some spontaneous revelation. This is an important insight in the humanity of Jesus and the fact that his experiences, growth, and development were very human in nature, in keeping with the character of Luke’s narrative emphasizing the humanity of Christ and how much He had in common with all of us during His earth walk.