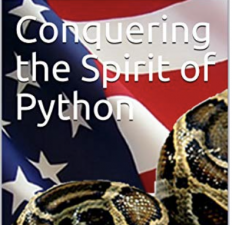 The Python Spirit Will Surface when You are in Transition:

Act 16:11-12 – Therefore loosing from Troas, we came with a straight course to Samothracia, and the next [day] to Neapolis; And from thence to Philippi, which is the chief city of that part of Macedonia, [and] a colony: and we were in that city abiding certain days.

Transition is always challenging and distracting. You will be tired and your mind will be tracking many details. That is the time that the Python influence will show up. So keep things simple and don’t make any major commitments when you know you are in a time of shift and transition.

The Python Spirit Will Show Up when You have a Relationship Failure:

Paul’s original vision was a MAN in Macedonia calling on him to come and help. So Paul shows up in Macedonia and guess what? There is NO MAN! Can you imagine the pressure as Paul tries to figure out did he miss it? Was it a real vision or just something in his own humanity?

When someone connected with your mission falters or fails you will be vulnerable to the python spirit putting the squeeze on you with self-doubt, having to justify your actions to your team members and having difficulty hearing from God because you are questioning what He already told you.

In the midst of the confusion Paul held everything loose enough to identify what God was doing:

Act 16:14 – And a certain woman named Lydia, a seller of purple, of the city of Thyatira, which worshipped God, heard [us]: whose heart the Lord opened, that she attended unto the things which were spoken of Paul.

Don’t get religious about expecting God to fulfill what he tells you with exactitude. In the Old Covenant God wrote in stone. In the New Covenant Jesus writes in sand (John 8:6). The voice of God in the Old Covenant spoke to man’s fracture and disobedience. The voice of God in the New Covenant speaks to your potential and your righteousness in Christ. In the Old Covenant God spoke to men as servants. In the New Covenant God speaks to men as SONS. Sons get to choose. Therefore expect variables. Men’s will changes and God’s will changes in adjustment to the choices He allows men to make. Be prepared for that and don’t fall apart if you have to fall back and retrench and go in a completely different direction or choose a different strategy. Keep tracking the Holy Ghost and don’t let the python spirit stymie you with your own rigid expectations and requirements. Grow up!

The Python Spirit Works to Keep You Isolated:

When the man in Paul’s vision opted out of his assignment the Lord had a back up plan in Lydia. I personally have experienced this many times. Some of the greatest things God let me be a part of I was given to know that I wasn’t His first choice. I don’t mind being God’s second string.

Act 16:14-15 – And a certain woman named Lydia, a seller of purple, of the city of Thyatira, which worshipped God, heard [us]: whose heart the Lord opened, that she attended unto the things which were spoken of Paul. And when she was baptized, and her household, she besought [us], saying, If ye have judged me to be faithful to the Lord, come into my house, and abide [there]. And she constrained us.

Lydia was a carrier of the glory. Lydia was a gatekeeper of the anointing of God. She was a tender and a keeper in the area and a principality and power in prayer in Philippi. Paul was already tracking the python spirit and could have easily dismissed this seller of purple. Lydia was a single woman in business for herself who didn’t shy away from being seen in public. This means in that culture she was short on respectability but Paul looked past that and in so doing secured the opening to one of the greatest power visitations in that city.

The spirit of python will position itself to distract you away from the time needed to invest in new and meaningful relationships. You have to know by the Spirit when to break your pattern and invest in someone God puts in your life. Many ministries err in this area by maintaining a “shields up” attitude toward all comers in their life. You see this in ministries that are insular and inaccessible with body guards and several levels of underlings between them and the outside world. Jesus was accessible and approachable. In Mark 10:14 Jesus reproved his disciples for running interference between him and the public. He was permissive toward the younger generation because he saw the DNA of the kingdom in them. Failure to correct over reaching in this area of accessibility will rob your ministry of fresh insights and new opportunities. Paul was wise enough to connect with people who were unknown and unsung yet like Lydia became powerful components in what God called him to do in Philippi.