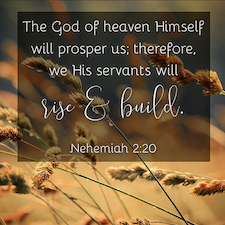 In Nehemiah 2, Nehemiah stands before the king with a sad countenance regarding the state of affairs in Jerusalem. The king inquires and ultimately gives Nehemiah permission to return and rebuilt the gates and walls. When Nehemiah arrives Sanballat mocks and impedes the project. Nehemiah persists – taking his famous midnight right. Nehemiah came to build and restore but he first had to deal with those who mocked and ridicule because they didn’t want change to come. In your life you must learn how to deal with Sanballat the mocker whoever he may be in your circle of friends and close acquaintances.

[Neh 2:1-20 KJV] 1 And it came to pass in the month Nisan, in the twentieth year of Artaxerxes the king, [that] wine [was] before him: and I took up the wine, and gave [it] unto the king. Now I had not been [beforetime] sad in his presence. 2 Wherefore the king said unto me, Why [is] thy countenance sad, seeing thou [art] not sick? this [is] nothing [else] but sorrow of heart. Then I was very sore afraid, 3 And said unto the king, Let the king live for ever: why should not my countenance be sad, when the city, the place of my fathers’ sepulchres, [lieth] waste, and the gates thereof are consumed with fire? 4 Then the king said unto me, For what dost thou make request? So I prayed to the God of heaven. 5 And I said unto the king, If it please the king, and if thy servant have found favour in thy sight, that thou wouldest send me unto Judah, unto the city of my fathers’ sepulchres, that I may build it.

In the previous chapter Nehemiah receives word of the unhappy state of affairs in Jerusalem. The city walls have been destroyed and the gates burned with fire. Nehemiah is the king’s cup bearer and stands closer to the king than any other man in the empire. Nehemiah prays and fasts and then goes about his business waiting for an opportunity to speak to the king. While still hesitant the king himself notices that Nehemiah is disturbed and realizes that it isn’t a physical ailment rather that he is emotionally distraught and inquires. Nehemiah’s response was fear because to show emotion particularly unhappiness in the presence of the king could be a death sentence. He prays a quick prayer under his breath and tells they king why he is upset. The king hears of the condition of Nehemiah’s homeland and knows that Nehemiah wants something. After the king asks Nehemiah makes request that he might return to Jerusalem and rebuild the walls and gates of the city once again.

Why was the king willing to assist Nehemiah? Remember that Nehemiah was his cup bearer. That means that Nehemiah’s job was to make sure that the king did not die by poison. Before the king would eat anything Nehemiah would eat first so that in the event of poison Nehemiah would die first and save the king. While it is possible that the king is descended from Esther there is no indication that he is a person of faith. Yet Nehemiah served the king even putting his life on the line in his behalf. When you are in the world you are going to have relationships with men and women not of your faith. What is to be your posture toward them? Are you trustworthy in your employment or in your dealings with people or businesses that depend on you? Do they look at you knowing they can trust you implicitly? Because of Daniel’s integrity the favor of God opened an opportunity for him to return to rebuild the city walls.

6 And the king said unto me, (the queen also sitting by him,) For how long shall thy journey be? and when wilt thou return? So it pleased the king to send me; and I set him a time. 7 Moreover I said unto the king, If it please the king, let letters be given me to the governors beyond the river, that they may convey me over till I come into Judah; 8 And a letter unto Asaph the keeper of the king’s forest, that he may give me timber to make beams for the gates of the palace which [appertained] to the house, and for the wall of the city, and for the house that I shall enter into. And the king granted me, according to the good hand of my God upon me. 9 Then I came to the governors beyond the river, and gave them the king’s letters.

Now the king had sent captains of the army and horsemen with me. 10 When Sanballat the Horonite, and Tobiah the servant, the Ammonite, heard [of it], it grieved them exceedingly that there was come a man to seek the welfare of the children of Israel. 11 So I came to Jerusalem, and was there three days. 12 And I arose in the night, I and some few men with me; neither told I [any] man what my God had put in my heart to do at Jerusalem: neither [was there any] beast with me, save the beast that I rode upon. 13 And I went out by night by the gate of the valley, even before the dragon well, and to the dung port, and viewed the walls of Jerusalem, which were broken down, and the gates thereof were consumed with fire. 14 Then I went on to the gate of the fountain, and to the king’s pool: but [there was] no place for the beast [that was] under me to pass. 15 Then went I up in the night by the brook, and viewed the wall, and turned back, and entered by the gate of the valley, and [so] returned. 16 And the rulers knew not whither I went, or what I did; neither had I as yet told [it] to the Jews, nor to the priests, nor to the nobles, nor to the rulers, nor to the rest that did the work.

Part 2 – To be Continued Tomorrow