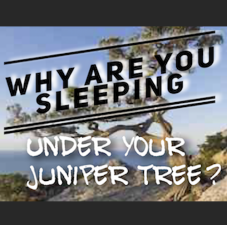 [1Ki 19:4-5 KJV] 4 [And Elijah] went a day’s journey into the wilderness, and came and sat down under a juniper tree: and he requested for himself that he might die; and said, It is enough; now, O LORD, take away my life; for I [am] not better than my fathers. 5 And as he lay and slept under a juniper tree…

In 1 Kings 19 we find Elijah having slain 450 prophets of Baal, is now on the run from Jezebel who had threatened his life. Apparently, the stress was too much, and rather than challenge Jezebel, he flees, goes into the wilderness and collapses, helpless and despairing under a Juniper tree. This is interesting because prophets that are despairing in their assignments tended to have thought- provoking experiences with the flora and fauna around them. Elijah has a visit from an angel under a Juniper text in our text. Jonah on the other hand, lay despairing and mourning under a gourd that had sheltered him when God Himself spoke to Jonah, correcting Jonah’s thinking about the repentance of Nineveh.

Can you relate to Elijah? Have you ever been under maximum pressure for a prolonged period of time and just wanted to give up? Have you like Paul had your share of struggles and challenges to the point of just wanted to die?

[2Co 1:8 KJV] 8 For we would not, brethren, have you ignorant of our trouble which came to us in Asia, that we were pressed out of measure, above strength, insomuch that we despaired even of life:

Does this describe something that you have gone through on the job? In your marriage? With your kids? In a church situation? In a health scare? In a financial situation? What Paul went through in his traveling ministry, every one of us either has gone through (at times more than once) or will go through. Some of us might feel that your whole life has been one major pressure cooker from which you feel there is no escape.

God is With You No Matter What:

Where is God in all of this? Have you despaired to the point of exasperation in your life? I want you to know that you are not alone. Jonah got so angry that God let his gourd die that he mouthed off to God about it and even dared God to kill him:

[Jon 4:8-9 KJV] 8 And it came to pass, when the sun did arise, that God prepared a vehement east wind; and the sun beat upon the head of Jonah, that he fainted, and wished in himself to die, and said, [It is] better for me to die than to live. 9 And God said to Jonah, Doest thou well to be angry for the gourd? And he said, I do well to be angry, [even] unto death.

Can’t you hear Jonah? Over a GOURD – “Go ahead, God – KILL ME! I dare you!” Come on – how about you? Has God let your gourd die? Sure you have. Those close to you know it because behind they said “he’s lost his gourd…” If you have ever said “I just can’t take it any more – I quit!” I submit to you that like Jonah – God let your gourd die. You didn’t get your way and it WASN’T that God didn’t love you or have a better plan.

When Elijah got to the end of himself lying under that Juniper tree that is when God sent an angel to him. Angels show up when you are at the end of yourself. Even Jesus dealing with wild beasts and with Satan himself experienced what it was to be ministered to by angels sent to comfort and strengthen Him:

[Mar 1:13 KJV] 13 And he was there in the wilderness forty days, tempted of Satan; and was with the wild beasts; and the angels ministered unto him.

Lessons with Elijah Under the Juniper Tree:

When Elijah lay under the Juniper there were several things that happened to him that we can learn from:

[1Ki 19:5-8 KJV] 5 And as he lay and slept under a juniper tree, behold, then an angel touched him, and said unto him, Arise [and] eat. 6 And he looked, and, behold, [there was] a cake baken on the coals, and a cruse of water at his head. And he did eat and drink, and laid him down again. 7 And the angel of the LORD came again the second time, and touched him, and said, Arise [and] eat; because the journey [is] too great for thee. 8 And he arose, and did eat and drink, and went in the strength of that meat forty days and forty nights unto Horeb the mount of God.

You might think you are out of strength, out of reserves, out of money, out of time and patience but I want to tell you that God has prepared a strengthening for you in the midst of your adversity to get you through your situation as he did Elijah. Elijah went 1 day into the wilderness and gave up – but God had 40 more days for him to go. You think you can’t go any further but God says – receive My strength and I will cause you to go much further than you ever thought you could go EVEN to the MOUNT OF GOD. If you don’t feel that strength in you right now then I QUESTION YOUR DIET. What are you feeding yourself on? Television? Facebook? Worldly entertainments? Things are the way they are because of what you are doing – if you want something different you have to do something different! God is no respecter of persons. If you do under your Juniper tree what Elijah did under his – you will get the same results!