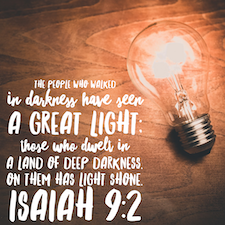 In Isaiah 9 the prophet Isaiah is warning the two houses of Israel that their reliance on foreign powers to save them from invasion will lead to their destruction. In the midst of describing the dark days ahead Isaiah lapses into a pronouncement of Messianic glory within whose verses we find some of the most familiar, most quoted verses of the Old Testament about the coming of Jesus. Many times, when you are frustrated and pressed to the point of total anxiety, God will often and inexplicably change the subject and instead of telling you what He will do about what is right in front of you – begins and chooses to draw your attention to transcendent matters of coming glory that are difficult for us to put our minds on given our present distresses.

Are you willing to let God steer His conversation with you where He wants it to go? These two houses of Israel in Isaiah’s day refused to hear what the prophet was saying. They dismiss His words and go on pursuing their own idea of what had to happen to save their nations. As a result, they will be overrun and come to defeat in spite of Isaiah’s promise of a savior to come.

[Isa 9:1-21 KJV] 1 Nevertheless the dimness [shall] not [be] such as [was] in her vexation, when at the first he lightly afflicted the land of Zebulun and the land of Naphtali, and afterward did more grievously afflict [her by] the way of the sea, beyond Jordan, in Galilee of the nations. 2 The people that walked in darkness have seen a great light: they that dwell in the land of the shadow of death, upon them hath the light shined. 3 Thou hast multiplied the nation, [and] not increased the joy: they joy before thee according to the joy in harvest, [and] as [men] rejoice when they divide the spoil. 4 For thou hast broken the yoke of his burden, and the staff of his shoulder, the rod of his oppressor, as in the day of Midian. 5 For every battle of the warrior [is] with confused noise, and garments rolled in blood; but [this] shall be with burning [and] fuel of fire.

In chapter 8 we see Isaiah under directions of the Father causes his wife to conceive. The pregnancy is verified by another prophet and a priestly scribe and reported publicly in the court of king Ahaz. Then Isaiah goes on to prophesy that before the child is mature enough to call its mother’s name that the northern kingdom will be dismantled and the southern kingdom will be overrun. The judgments Isaiah pronounces thus far in the book of Isaiah are because Jerusalem is a city called Sodom and Gomorrah, it is filled with idolaters and murderers. Both the northern and southern kingdoms have turned from trusting in God and formed alliances with foreign powers that Isaiah predicts will ultimately come in a destroy both kingdoms. In the midst of great rebuke and reproof there are moments of scintillating prophetic insight where in the midst of very dark contemporary events Isaiah by the spirit of prophecy sees down through the centuries that a virgin shall conceive and bring forth a son.

It is a peculiar nature of the prophetic that when we seek God regarding matters contemporary to us that He will often give us more information than we asked for. I have often gone to God crying out for relief or answers for something right in front of me only to have Him dismiss my urgent matter with a wave of His hand. It is as though He says “I’ve already taken care of this – let Me show you what is really on My mind!” Thus He does in Isaiah – breaking through the nauseating address of corruption, idolatry and faithlessness all around Isaiah to announce some of the greatest, most profound Messianic portents found anywhere in the bible and this chapter is no exception.

So learn to let God steer the conversation where He wants it to go and not insist that what He has to say must address what you think needs His attention. Remember the words of Amos in Amos 9:13 that in a time of evil keep silence and be more ready to listen to what God has to say rather than demand that He act and speak according to what you think needs dealt with in your life. Then you are brought up into the mind of God and see things from His transcendant perspective rather than the confusing, blinding demands of the urgent issue that you think is so important and can’t see beyond

Chapter 9 begin with a statement of perspective on the prediction of the total destruction of the two houses of Israel. Isaiah says in effect “though things are going to get bad – nonetheless it won’t be so dark as has happened before…” and then goes on to make the comparison of prior events in what is now known even in Isaiah’s time as Galilee of the Gentiles. Upon placing the lens of his prophetic insight on the land of Galilee Isaiah abruptly changes focus and declares “The people that walked in darkness have seen a great light: they that dwell in the land of the shadow of death, upon them hath the light shined…”

What is going on? Isaiah is looking down through several centuries and see the birth, and ministry of Jesus of Nazareth. He also looks by the prophetic spirit at what the nation will look like at that time and see that in Jesus’ day that the nation of Israel has increased and been restored from a destruction yet to come yet he also sees that there is no joy among them. Indeed in Jesus’ day there was much contention and strife among the Jews who were so full of turmoil that they rejected Jesus when He showed up and even crucified Him. He then turns His eye back to the great light he sees in Galilee and goes on to declare what he sees

Part 2 – To be Continued