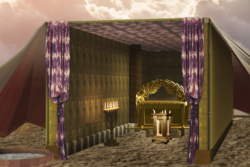 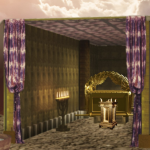 God is asking us to relinquish church as we know it for church as He wants it. Amos prophesied that in the last days that the Tabernacle of David would be restored. Peter quoted Amos in this regard in Act 15:16 when he was making the case for allowing Gentiles into the newly founded church that had been exclusively Jewish up to that time. The Tabernacle of David was an open-air tent pitched outside David’s palace after he brought it home from captivity. The Tabernacle of Moses with all its enclosures was available in Shiloh but David didn’t return the ark to the priests (which no doubt displeased them). Instead, he basically put it in his backyard and appointed singers to sing to it 24 hours a day.
Singing had not been a part of the formal tabernacle activities up to this point looking back over the centuries to the days of Moses but David changed all that. The interesting thing was that the singing was not for the people but for the Lord. The singers didn’t face the people, nor is there any reference to an audience of any kind participating. The concept of worship in the Tabernacle of David was completely the opposite of “worship as performance” as it is conducted today. They didn’t face the people they faced the Lord in the Ark. What does that tell us?
When the emporer Constantine gave the church state protection in the third century he abolished house churches (on pain of death). when that had been the only way believers had gathered for centuries. Instead, he established places of worship directly modeled on the Greek theatre which was the primary entertainment venue in ancient Rome at that time. Under Constantine, the ministers and the worship leaders for the first time stepped on to a raised platform to conduct services in exactly the same way that plays were put on at the time. What does this mean? Church went from being a vibrant interactive spiritual community (see 1 Cor. 14:26) to sitting quietly and passively as an audience for the first time – an audience that was expected not to interrupt the performance or interact in any way as to disrupt the proceedings on the platform. This manner of conducting Christian gatherings continues relatively unchanged to this day.
Amos predicted that in the last days the Tabernacle of David would be restored that had fallen down. Constantine (a brutal man who killed his sons and murdered his wife) didn’t do the church any favors by moving it from the house to the theater. Under his demands, the church became a caricature of itself that has not risen far above state control in the centuries since. Before Constantine, the church was so dynamic that it brought the might of Rome to its knees. The church isn’t impacting society today as it did before Constantine. It isn’t confronting society so much as it is merely part of society with its many edifices bedecked with phallus symbols (spires and steeples) on every street corner. The church’s definition of reform today is envisioned as political take-over IN the world system but Paul taught we are to OVERCOME the world. If we ever have TRUE APOSTLES today they will be men with prison records for their boldness and martyrdom will be common. In the meantime, let’s have some honest self-examination and ask God to restore the Tabernacle of David that is fallen down (again). Let us ask God to take us from CHURCH AS PERFORMANCE to something more akin to what the church was that brought Rome to its knees and saw cities turned upside down for Christ.
Add feedback