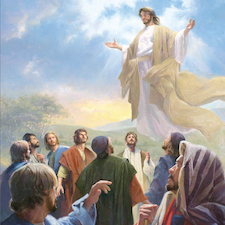 In chapter 28 of Matthew, an angel appears at the tomb of Jesus to reveal that Jesus has risen. The soldiers on guard are struck with amazement, and the women fall at Jesus’ feet to worship Him. He instructs them to remind the disciples to meet Him in Galilee. At Galilee, Jesus gives proof of His resurrection to the doubting apostles and commissions them, and by extension, commands us as well to bring the message of the gospel to all the world.

[Mat 28:1-20 KJV] 1 In the end of the sabbath, as it began to dawn toward the first [day] of the week, came Mary Magdalene and the other Mary to see the sepulchre. 2 And, behold, there was a great earthquake: for the angel of the Lord descended from heaven, and came and rolled back the stone from the door, and sat upon it. 3 His countenance was like lightning, and his raiment white as snow: 4 And for fear of him the keepers did shake, and became as dead [men]. 5 And the angel answered and said unto the women, Fear not ye: for I know that ye seek Jesus, which was crucified. 6 He is not here: for he is risen, as he said. Come, see the place where the Lord lay. 7 And go quickly, and tell his disciples that he is risen from the dead; and, behold, he goeth before you into Galilee; there shall ye see him: lo, I have told you. 8 And they departed quickly from the sepulchre with fear and great joy; and did run to bring his disciples word. 9 And as they went to tell his disciples, behold, Jesus met them, saying, All hail. And they came and held him by the feet, and worshipped him. 10 Then said Jesus unto them, Be not afraid: go tell my brethren that they go into Galilee, and there shall they see me. 11 Now when they were going, behold, some of the watch came into the city, and shewed unto the chief priests all the things that were done. 12 And when they were assembled with the elders, and had taken counsel, they gave large money unto the soldiers, 13 Saying, Say ye, His disciples came by night, and stole him [away] while we slept. 14 And if this come to the governor’s ears, we will persuade him, and secure you. 15 So they took the money, and did as they were taught: and this saying is commonly reported among the Jews until this day. 16 Then the eleven disciples went away into Galilee, into a mountain where Jesus had appointed them. 17 And when they saw him, they worshipped him: but some doubted. 18 And Jesus came and spake unto them, saying, All power is given unto me in heaven and in earth. 19 Go ye therefore, and teach all nations, baptizing them in the name of the Father, and of the Son, and of the Holy Ghost: 20 Teaching them to observe all things whatsoever I have commanded you: and, lo, I am with you alway, [even] unto the end of the world. Amen.

In chapter 28 of Matthew, we find the two Mary’s returning to the tomb of Jesus at the end of the Sabbath. It is Sunday morning, a Sunday morning that will change the significance of that particular day forever, that in Christian tradition will become the primary meeting day of believers around the world. This is disputed by those who claim the Sabbath, or Saturday is the day the church should gather, but in the New Testament record, 1 Cor. 16:2 and Acts 20:7 inform us beyond dispute that it was the custom of the early church to meet on Sundays in commemoration of the resurrection of Christ.

The two Mary’s arrive at the tomb just in time to witness a great earthquake as the angel of the Lord descends to roll away the stone from the sepulcher and sit upon it. The angel’s appearance was that of blazing light, as though he is clothed in lightning itself. The soldiers that are stationed there to guard the body of Jesus are struck like dead men in fright, which the angel ignores, turning rather to address the women telling them that Jesus is not there, but is risen. It is interesting to note then that when the angel rolled away the stone, Jesus was already gone. The stone was not rolled away to release Jesus; it was rolled away to give witness to men, the two Mary’s specifically, that Jesus was no longer there. The angel invites the women to confirm by looking into the tomb that the body is gone, that Jesus is risen and to go and inform the disciples that Jesus will meet them in Galilee. The two Mary’s turn and run to find the disciples when Jesus Himself intercepts them before they can leave the tomb, and they fall on their faces, holding Him by His ankles, worshipping Him.

The angel apparently didn’t expect Jesus to greet the women at the tomb. The angel came to give the women witness to the resurrection by showing them an empty tomb and then instructed them to tell the disciples that Jesus could be found in Galilee. Jesus, however, interrupts the plan by showing up immediately to greet His friends, the two Marys. It is as though Jesus Himself cannot wait to greet them, and instead of waiting till the disciples go to Galilee, He embraces the women, rejoicing with them and repeating the instruction that He will meet the 11 remaining apostles in Galilee.

For More Resources by Prophet Russ, Check out the Shop