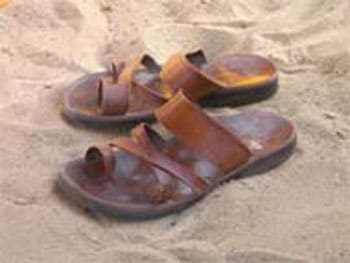 Take Your Shoes Off – This is Holy Ground

In Acts7:33, when Stephen’s face shone like an angel’s, He spoke of Moses taking off his sandals in God’s presence:

Acts 7:33 Then said the Lord to him, Put off thy shoes from thy feet: for the place where thou standest is holy ground.

This verse refers to one of two places in scripture, where men are commanded to take off their shoes on holy ground. What is the significance of this? The specific references are as follows:

[Exo 3:5 KJV] 5 And he said, Draw not nigh hither: put off thy shoes from off thy feet, for the place whereon thou standest [is] holy ground.

[Jos 5:15 KJV] 15 And the captain of the LORD’S host said unto Joshua, Loose thy shoe from off thy foot; for the place whereon thou standest [is] holy. And Joshua did so.

Both instances involved influential leaders at critical junctures in their lives. Moses was receiving his commission before the burning bush. Joshua was reconnoitering Jericho before the walls fell. Both men were standing before angels who gave them the command to take their sandals off in their presence. You might ask where the angel was in Moses’ case? We usually think of Moses standing before a supernatural fire in a bush, but Stephen by the Holy Ghost tells us it wasn’t just a fire out of which the voice of God came; it was an angel:

Acts 7:30 And when forty years were expired, there appeared to him in the wilderness of mount Sina an angel of the Lord in a flame of fire in a bush.

“If you can get the people to believe nothing shall stand before you, not even cancer.”

We see then that credibility and belief are involved when these encounters happened when men were commanded to take off their shoes. In Moses’ case, he asked by what sign the elders of Israel would believe God sent him. Standing before the angel in the burning bush, he was given the sign of his staff turning into a serpent and back and one other sign. So there is a connection between commissioning, belief, message, and mandate and taking your shoes off on holy ground.

What about you? Have you had an experience such as this? Have you ever taken off your shoes because of a tremendous sense of God’s presence at a particular moment? This experience was not intended to be only for a select few. Paul spoke of this as being the believer’s continuous exposure to God’s presence on an ongoing basis. Read the following:

That word circumspect in this verse? It means “to walk barefoot.” Why? Because you are God’s holy ground. It isn’t just where you are; it is what you are. You are His temple and His tabernacle on the earth. You are commissioned and mandated from heaven – TAKE OFF YOUR SHOES FROM OFF YOUR FEET!

Why take off your shoes? Because they represent the same thing that Adam and Eve sewing fig leaves together after the fall gave evidence of. They are man’s attempt to deal with his environment outside of God’s plan and without God’s help. Angels are offended by shoes because they represent man’s disobedience to God and man’s rebellion against God’s order. When we realize we are on holy ground, we don’t want shoelaces or fig leaves to come into the picture.

Taking your shoes off also speaks of DIRECT CONNECTION to the DIVINE. When Jesus died and rose again, He took out the middle man. We don’t need religious infrastructure or any man to connect to the God that bought us. Some call themselves apostles today that claim our approach to God can only come through them and that they only can give us the communion elements or extend to us God’s forgiveness. That is incorrect. Jesus didn’t die to relate to you through a third party. He lives in you. You are His place of habitation. You are on Holy Ground. Take off your shoes. Soak Him into your pores. Let Him fill you and flood you with His glory – for there is a mandate this day for you to fulfill and a destiny in God to pursue!