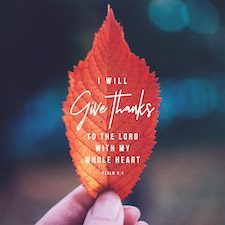 In Psalm 9 we see David praising God for victories won. There were many attacks upon David during his life and reign. Sometimes these attacks came from without and sometimes from within. David learned in his relationship with God not to take matters into his own hands but to trust in God for the outcome. In your life you will face many challenges and provocations but we can learn from the words of David the absolute importance of relying on God for our defense.

[Psa 9:1-20 KJV] 1 [[To the chief Musician upon Muthlabben, A Psalm of David.]] I will praise [thee], O LORD, with my whole heart; I will shew forth all thy marvellous works. 2 I will be glad and rejoice in thee: I will sing praise to thy name, O thou most High. 3 When mine enemies are turned back, they shall fall and perish at thy presence. 4 For thou hast maintained my right and my cause; thou satest in the throne judging right. 5 Thou hast rebuked the heathen, thou hast destroyed the wicked, thou hast put out their name for ever and ever. 6 O thou enemy, destructions are come to a perpetual end: and thou hast destroyed cities; their memorial is perished with them. 7 But the LORD shall endure for ever: he hath prepared his throne for judgment.

The opening of Psalm 9 mentions being “upon Muthluben” which some believe indicates the tenor of the song or the instrument to be played. Many believe the word Muthluben is a cryptogram because taken in parts it contains the words “death” and “Nabal” – the husband of David’s second wife Abigail. If you look at 1 Sam. 25 you will find that Nabal insulted David and became so angry at David that he died of a stroke. Thus David took Abigail to be his wife. Thus as we read the psalm we see it refers to the fate of David’s enemies.
David rejoices because his enemies are turned back in their purpose and fall as a result. David understood that the dealings of God with his enemies did not end with them being defeated before his face. He watched on many occasions and saw that even in defeat God dealt with those that opposed him. Did this mean to David that he saw himself as such a righteous man that God would defend him? No – because when the anointing of king was upon Saul David learned that God even defended Saul as a flawed and at times very evil person. When given opportunity to kill Saul in his sleep David refused saying he would not touch God’s anointed king.

God takes it personally when someone seeks to do you wrong or do you harm whether in word or in deed. There is the story of Demitri Duduman who was held in a Romanian gulag because he was a Christian pastor. Sentence was passed upon him and he was taken to the electric chair. When the switch was thrown Duduman was unharmed but the presiding officer in the next room dropped dead at his desk. King Herod sought the life of young Jesus but instead collapsed during an oration before an adoring throng and was consumed with worms.

What about the case when two people – both Christians begin to tear at one another and slander one another? Both are born again. Both have Christ in them and go to the altar in tears believing they are in the right. What is the case in this matter? In Gen. 12:3 God promises that he will bless those that bless you and curse those that curse you. What happens when by our actions and our words we begin to curse and “trifle” with one another? God takes His hands off of both parties. That is why as David learns it is vital to do as Jesus said in Matt. 5:9 to “resist not evil…” When a brother or sister in Christ comes against you the answer is to “go low” and let the Lord fight the battle. V. 3 says that when David’s enemies came against him from within they “fell at God’s presence…” Which meant it wasn’t by David’s hand but by the hand of God.

David goes on to say in v. 4 that he understands that it is God who will maintain his cause to rebuke the heathen, destroy the wicked and put out their name forever. God takes it personally when someone comes against you. He shows great forbearance and so should you but make no mistake – God is your defense and your defender.

Part 2 – To be Continued Tomorrow