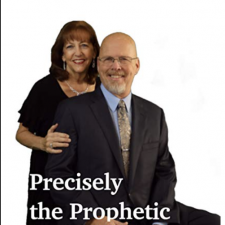 We could write a veritable encyclopedia of the things that God has done in our lives and the adventures we have experienced. The last thing we want to share in this book is about a nationwide assignment that laid the foundation for what Father’s Heart Ministry would become in the early days of our work together.

Kitty and I came together to work in ministry in 2007 and married in 2010. During those years, we continued in the work-a-day world, although we had a keen desire to be full-time for the Lord. After marrying in October of that year, we set up house in Republic, Missouri. At the time we kept the business in Clinton Missouri going having hired an employee to take care of things part of the week, and we would then go up toward the end of the week for a few days. Denise Allsop, a good friend (who would eventually become one of the first employees of Father’s Heart Ministry) had at first offered Kitty a job managing her speech pathology practice. This was a working arrangement, and we worked to remain faithful – all the while believing God that one day Father’s Heart Ministry would be our full-time employ.

One day, Kitty and I were discussing these things and looking forward to the year ahead wondering what would unfold for us in the coming months. Kitty asked the question, “Russ, what is your highest heart’s desire?” It was difficult for me to answer. From my early twenties until God put me in the business world all I’d ever known was full-time ministry, first as the pastor of two churches over the course of 20 years and then working as the assistant overseer of a small denomination with its headquarters in Southeast Missouri. Kitty asked the question and wouldn’t let me squirm out of answering. Finally, with tears in my eyes, I admitted that my greatest desire at that time was to work full-time dedicated to the Lord.

“That’s it then,” she declared. “Let’s believe we receive and expect that being full-time in ministry is exactly what the Father has in store for us.”

One thing you have to know is that prayer and faith believing are part of the equation of seeing a breakthrough from God, but it isn’t the only thing. You must put legs to your prayers. A short time later, I was at my desk, and Kitty came in to make an announcement:

“God says that we are to take the vacation money we’ve been saving up and lay it at Prophet Kim Clement’s feet.”

Instantly, I knew that was God but stated one observation at the same time. “If we do that fine, but there will be no vacation.” It wasn’t precisely a faith-filled declaration, but nonetheless, I sat down and wrote a letter in my own hand to send with the check we wanted Kim to receive. It was a large amount of money for us at the time, $1000.00. In my letter, we stated that this was our vacation money but that we would rather lay this at Kim’s feet than go on vacation. This act of obedience would reap for us miraculous rewards. We asked Kim if he was so inclined, to pray for us because we were believing to be full time for the Lord and then we mailed the gift to his ministry address.

A few days later, our phone rang, and there was an excited friend on the other line. “It’s you. It’s you!” We weren’t sure what she was talking about, but she went on to say that Kim Clement was reading letters on the air and mentioned a “Russ and Kitty” who had sacrificed to give their vacation money to the Lord. He went on to say that this Russ and Kitty didn’t ask for a million dollars or anything for themselves but only to be full time in the ministry of the gospel. A day or so later, we received a beautiful drawing in the form of a note in Kim’s own hand agreeing with us for our heart’s desire

Four months later, we stepped out of the employment we were in, sold the business, and we’ve been full-time in ministry from that day on. This was just the beginning of the adventures of Russ and Kitty. I thought there would be no vacation, but in fact, we were blessed to go on vacation, leaving Republic Missouri and driving across Kansas to visit Royal Gorge, Colorado. This would be a big part of our story because coming back, driving across the plains, the Spirit of God descended into that car and began to speak with me. I was driving at the time, and Kitty was dozing in the passenger side. When she awoke, I shared with her the instructions God had given:

“We are supposed to give away all our possessions, get in our car, and drive across the country preaching the gospel.