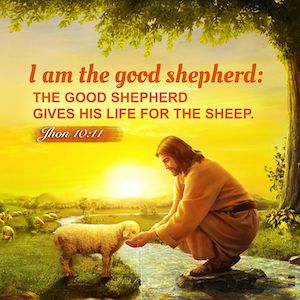 15 As the Father knoweth me, even so know I the Father: and I lay down my life for the sheep. 16 And other sheep I have, which are not of this fold: them also I must bring, and they shall hear my voice; and there shall be one fold, [and] one shepherd. 17 Therefore doth my Father love me, because I lay down my life, that I might take it again. 18 No man taketh it from me, but I lay it down of myself. I have power to lay it down, and I have power to take it again. This commandment have I received of my Father. 19 There was a division therefore again among the Jews for these sayings. 20 And many of them said, He hath a devil, and is mad; why hear ye him? 21 Others said, These are not the words of him that hath a devil. Can a devil open the eyes of the blind?

In verse 10, Jesus helps us understand this by saying if something enters your life to steal, kill, and destroy, it is the thief; it is Satan himself. Why is it then that Christians go through such things and say that God is teaching them something? This is tantamount to blasphemy. Blasphemy is attributing the works of God to the devil. To think that God is stealing, killing, or destroying in your life is like unto it – attributing the works of the devil to God. Where do Christians get such ideas? From preachers and teachers with a tear in their voice claiming that what the enemy is doing really isn’t the enemy but God teaching them something. That is a total lie. It is despicable. What do such things have to do with life and life more abundantly? Jesus is the good Shepherd who gives His life for the sheep that we might be saved from the wiles and wickedness of the enemy

[Jhn 10:22-42 KJV] 22 And it was at Jerusalem the feast of the dedication, and it was winter. 23 And Jesus walked in the temple in Solomon’s porch. 24 Then came the Jews round about him, and said unto him, How long dost thou make us to doubt? If thou be the Christ, tell us plainly. 25 Jesus answered them, I told you, and ye believed not: the works that I do in my Father’s name, they bear witness of me. 26 But ye believe not, because ye are not of my sheep, as I said unto you. 27 My sheep hear my voice, and I know them, and they follow me: 28 And I give unto them eternal life; and they shall never perish, neither shall any [man] pluck them out of my hand. 29 My Father, which gave [them] me, is greater than all; and no [man] is able to pluck [them] out of my Father’s hand. 30 I and [my] Father are one.

31 Then the Jews took up stones again to stone him. 32 Jesus answered them, Many good works have I shewed you from my Father; for which of those works do ye stone me? 33 The Jews answered him, saying, For a good work we stone thee not; but for blasphemy; and because that thou, being a man, makest thyself God. 34 Jesus answered them, Is it not written in your law, I said, Ye are gods? 35 If he called them gods, unto whom the word of God came, and the scripture cannot be broken; 36 Say ye of him, whom the Father hath sanctified, and sent into the world, Thou blasphemest; because I said, I am the Son of God?

37 If I do not the works of my Father, believe me not. 38 But if I do, though ye believe not me, believe the works: that ye may know, and believe, that the Father [is] in me, and I in him. 39 Therefore they sought again to take him: but he escaped out of their hand, 40 And went away again beyond Jordan into the place where John at first baptized; and there he abode. 41 And many resorted unto him, and said, John did no miracle: but all things that John spake of this man were true. 42 And many believed on him there.

Jesus comes to the temple in winter and enters Solomon’s porch in v. 22. The Jews are frustrated and demand that Jesus make a plain statement as to whether or not He is the Messiah. Have you ever been frustrated because God isn’t speaking in a plainer way in your life? It is the glory of God to conceal a matter and the glory of kings to find it out. God speaks in parables. God communicates in dark speech. It is a religious mentality that objects to this.

Jesus’ answer to the Jews in v. 25 is that He has spoken clearly through His words and actions, but they did not believe. In other words, Jesus is saying that the problem isn’t that He isn’t speaking more clearly but that they do not believe what He has said. Many times, people will say, “I don’t understand” certain things of God, but in reality, what they are saying is “they don’t believe…” They say they don’t understand because they want to make others responsible for their own disbelief. Learn to listen with spiritual hearing, and you will save yourself much wasted time trying to convince someone who isn’t interested in being convinced but only in making an excuse for their unbelief.

Do you struggle with unbelief? Let us place this problem of unbelief where it belongs. Jesus says in v. 26 that we do not believe because we are not His sheep. When unbelief masters us, we are not living out of our sheep nature. We are conducting ourselves like goats. How many times do we say “but God” this or “but God” that and run out and listen to any random and strange teaching that completely leaves out the risen Christ and then blame God that we are not walking in breakthrough? Jesus concludes all such thinking as originating in the minds of those who do not belong to Him.

In verse 30, He goes on to tell the Jews that regardless of what they might think of Him, He is, even so, one with the Father. Then their true motives appear, and they take up stones to stone Him. They wanted to stone Him not because He wasn’t doing good works, but because He violated their doctrine. They refused to believe that God and man could be one, united in Christ. Even in religious circles today, if you dare to be one with the Father, you will receive persecution.

Religion is not about bringing you into oneness with the Father. Religion wants to come between you and God so that you can be controlled and manipulated by those who think they are the gatekeepers of your salvation. True religion that proceeds from Christ cuts out the middle man and brings you into a direct union with Christ not through religious protocols but through the efficacy of the shed blood of Christ on your behalf. The Jews have no willingness to believe in Jesus no matter what works He does or what He says and take up stones again to stone Him. Jesus withdraws eastward out of Jerusalem to the Jordan, and many crowds join Him there, believing in Him.

For Video and PDF of Entire Message Click Here