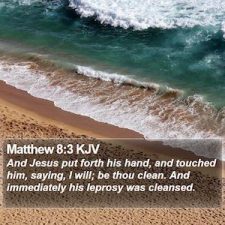 We have to understand what the authority of the believer is. God has given you authority. Jesus said greater works shall you do because He went to the Father. I believe the temptation to pray, to work one’s self up mentally or emotionally in the act of praying for the sick, is an indicator of unbelief and insecurity. We simply need to do as Jesus did with the leper (“I will”) and, in the case of the centurion, to simply send the word with an emphasis on the person’s willingness to believe (as you have believed, so be it done unto you)

Notice in verse 16 that after cleansing the leper and after healing the centurion’s servant, that many sick and oppressed people come to Jesus while He was staying at Peter’s house. Verse 16 says that He healed them ALL. Today we are taught that when healing doesn’t happen, it is because God had some deeper plan that dictated that you not receive the healing you have asked for in deference to some ineffable reason God has for keeping you sick (to glorify him, to witness to your doctors and nurses, to spare you from some future calamity, etc.,). If there is truth in that allegedly wise viewpoint, then why do we not see Jesus refusing to heal certain ones, even though He could? Why doesn’t He lay hands on someone, then stop because He senses this person needs to remain sick for the greater will of God? The fact that He NEVER does this is an indictment of the fallacious doctrines taught along this line that are simply a rationalistic justification for why people often don’t get healed even though they feel they are exercising faith to receiv

In verse 18, Jesus again acts in a counter-intuitive way, seeking to avoid the crowds that have gathered around Him. He makes not of the multitude and commands His disciples to get on depart to the other side of the sea. That isn’t how ministry gets done today. Doesn’t Jesus understand that we need to capitalize on the heat of the moment and the multitude at hand? As Jesus is preparing to depart, a scribe of the Pharisees comes to Him declaring the He will follow Him everywhere. Jesus looks at Him and points out that He doesn’t have anywhere to lay His head. Following Jesus often requires us to give up creature comforts and, more importantly, our own security. The scribe apparently wanted nothing of that, and we do not hear further from Him. Another disciple of Jesus’ growing number of followers asks Jesus to give Him time to deal with a death in the family. Jesus bluntly states that that the man should simply follow Him and let the dead bury the dead. Can you imagine? I thought the church was built on the foundation of the family? How could Jesus be so callous to the death of a loved one? This tells us that the values espoused by our religious culture are far different from the personal ethics that Jesus apparently lived by.

After entering into a ship and seeking to go to the other side, a great storm comes up to threaten the apostolic band of intrepid disciples. They are in fear of their lives, but Jesus is asleep in the bow of the boat. Why was Jesus sleeping? Because He was tired. When He healed, there was virtue or strength that went out of Him, and He needed rest and did so deeply that even a boisterous storm did not waken Him. The disciples in fear of their lives shake Jesus to wakefulness, crying out to Him to save them from the peril at hand. Jesus awakes and is more concerned about the storm of unbelief IN the disciples than the storm of wind around them. He obviously expected them to have a very different attitude about what they were facing. Have you ever had this response about a storm in your life? Rather than reactively crying out to God as though He isn’t paying attention, perhaps we should calm ourselves and have the faith that Jesus found singularly lacking in those that were in the ship with Him at the time.

In verse 28, Jesus comes to the country of the Gergesenes and is confronted by two demon-possessed individuals. They were so fierce and violent that travelers in the area made a point to avoid them at all costs. In verse 29, these possessed individuals declare that they want nothing to do with Jesus and, in fact, suggest that it wasn’t time for Jesus to exercise authority over them. Realizing that Jesus wasn’t going to retreat, they ask to be allowed to possess a herd of pigs who consequently throw themselves into the sea rather than be possessed by the demons who had inhabited these two men. What an amazing thing that the men had lived with these demons in them for some time, but the pigs became suicidal, preferring to die immediately than live one moment more bound by a demonic presence.

For Video and pdf of Entire Message Click Here