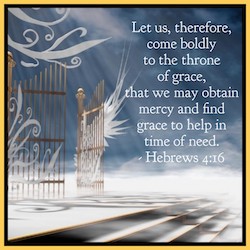 In chapter four of Hebrews we are encouraged to enter into the rest of God because our approach to His throne is on the basis of who Jesus is and what He did for us 2000 years ago. Our boldness to believe in and anticipate answers from heaven is not based on religious performance or by our own merits but rather by the merits of the sinless nature of Christ mediated for us moment by moment by Jesus as our High Priest.

[Heb 4:1-16 KJV] 1 Let us therefore fear, lest, a promise being left [us] of entering into his rest, any of you should seem to come short of it. 2 For unto us was the gospel preached, as well as unto them: but the word preached did not profit them, not being mixed with faith in them that heard [it]. 3 For we which have believed do enter into rest, as he said, As I have sworn in my wrath, if they shall enter into my rest: although the works were finished from the foundation of the world. 4 For he spake in a certain place of the seventh [day] on this wise, And God did rest the seventh day from all his works. 5 And in this [place] again, If they shall enter into my rest.

6 Seeing therefore it remaineth that some must enter therein, and they to whom it was first preached entered not in because of unbelief: 7 Again, he limiteth a certain day, saying in David, To day, after so long a time; as it is said, To day if ye will hear his voice, harden not your hearts. 8 For if Jesus had given them rest, then would he not afterward have spoken of another day. 9 There remaineth therefore a rest to the people of God. 10 For he that is entered into his rest, he also hath ceased from his own works, as God [did] from his. 11 Let us labour therefore to enter into that rest, lest any man fall after the same example of unbelief.

In chapter 4 the writer exhorts to godly fear of being excluded from what is described as the rest of God. What is the rest of God? What does it mean to us? Remember that Hebrews is written to the 1000s of Jewish converts who labored their entire lives under a religious system that demanded of them perfect obedience under threat of divine justice. In Christ the clemency of God is available not on the basis of continual animal sacrifice but on the basis of faith in the shed blood of Calvary as an abiding resource of total forgiveness. This is good news to the law-abiding observant Jew, but it comes with a condition of faith. In v. 2 we see that the existence of the sacrifice of Christ and the articulation of the gospel is not enough to secure salvation. This is being taught in Christianity today, and it is contrary to the teachings of the New Testament.

There are those who proclaim since Christ died for all then all are saved regardless whether they repent or have faith. These teachers depict a blanket clemency extended to all where even Satan himself is admitted into heaven eventually. This viewpoint is not new, and it is consistently contradicted throughout the New Testament. If we do not mix faith (our personal faith) with the message (v. 2), it profits us nothing. What are the implications of this? If we don’t hear the message or if we hear the message and choose not to have faith in the message of Jesus we are excluded, and in terms of the afterlife, it means that we will spend eternity in hell for no other reason than rejecting the gospel. It matters not if you are a good person. The tree Adam partook of in rebellion against God was not just the tree of evil it was the tree of good. Outside of Christ, your good condemns you as resoundingly as your evil. This is not a component of modern Christian teaching. It seems too restrictive. It isn’t cosmopolitan enough. It isn’t inclusive of other faiths or viewpoints. The fact is there is nothing inclusive about “depart you into outer darkness where there is weeping and gnashing of teeth…” but these are the words of Jesus to those who do not accept that no man comes to the Father except through Him.

If we do believe (v. 3) we will enter into the rest of God by an oath taken by the Father before the foundation of the world was laid. The concept of rest is expressed even in creation with the establishing of the seventh day as the rest of God. The concept of rest and the seventh day is found throughout the scripture. The number seven is a number representing completion. The Hebrew number is Zayin meaning sword, or to cut. Jesus gave the cup to his disciples at the Last Supper and called it the New Testament (or, covenantal cutting) in His blood. Religious adherence or performance does not complete us in the eyes of God.

Connection to Christian cultural infrastructure does not constitute us as children of God. That which settles our standing forever before God is what the Zayin, the cutting of God made available – i.e., the shed blood of Calvary. Lev. 17:11 tells us that the life is in the blood. The life of Jesus was in the blood and in that blood was his sinlessness, and his perfection poured out covenantally to cover our sin and imperfection. With our sin and imperfection covered in the eyes of divine justice, we are then rendered fit vessels for the indwelling of the Holy Spirit who comes and produces God’s nature within us not by adherence to the law but by faith in Christ and by virtue of the relationship that indwelling of God’s spirit makes possible.

This is the message (v. 6) that was first preached to the Jew and since the Jewish people as a nation rejected it there then remained another people (even the ethnicities of the earth) who would yet hear and receive the preaching of the gospel and be grafted into the place that the Jewish nation proved itself unworthy of. It is necessary to mention that the rejection of the message of Christ was brought about by its leaders who rejected Jesus as the messiah and rejected the message of the apostles who preached the resurrection of Jesus after his crucifixion by these very leaders. What that gives us to understand is if our leaders reject the gospel, so our nation is held accountable. This is chilling given the anti-Christ, secularist, elitist culture of God-rejecting politicians who dominate our nation’s halls of government. God deals with a nation according to the character and disposition of its leaders with reference to the message of the gospel.